Zika virus disease is spread to people primarily through the bite of an infected Aedes species mosquito. The most common symptoms of Zika are fever, rash, joint pain and conjunctivitis (red eyes). The illness is usually mild, with symptoms lasting for a few days to a week after being bitten by an infected mosquito. People usually do not become ill enough to visit a doctor. For this reason, many people might not realize they have been infected. Zika virus may also cause Guillain Barre Syndrome in infected individuals, involving tingling in the extremities and progression to muscle weakness and occasionally paralysis.

Zika virus infection during pregnancy can cause a serious birth defect called microcephaly, as well as other severe fetal brain defects. Microcephaly is a condition in which a baby is born with a much smaller head than normal because the brain has not developed properly during pregnancy. The baby may suffer from a number of physical and cognitive problems, ranging from mild to severe, including a decreased ability to learn and function. Understanding of the Zika virus and its effect on infected pregnant women and their babies is still evolving. The Centers for Disease Control (CDC) is the primary source for the most current information.

In May, 2015 a world health alert was issued regarding the first confirmed Zika virus infection in Brazil. Local transmission has been reported in many countries and territories since the first alert. The CDC lists the countries and territories reporting active Zika transmission. Please see http://www.cdc.gov/zika/geo/index.html and the CDC Traveler’s Health site http://wwwnc.cdc.gov/travel/ for the most updated travel information notices. Currently, the majority of these regions are in Central and South America. However, specific areas where Zika is spreading are often difficult to determine and are likely to change over time.

Testing for Zika virus is now available through the Quest and LabCorp laboratories. However, testing is not universally covered by insurance. To date, there are no vaccines to protect against Zika, and there is no specific treatment.

The CDC has provided guidance for pregnant women and women considering becoming pregnant. Please see http://www.cdc.gov/zika/specific-groups.html. The CDC has also issued guidelines for health-care providers in the United States caring for pregnant women and women of reproductive age. As more information becomes available about the Zika virus, these guidelines will be updated. In addition, the American Society of Reproductive Medicine (ASRM) has issued guidelines based on the CDC and Food and Drug Administration (FDA) published guidelines. Florida Fertility Institute follows these guidelines and strongly encourages you to continually monitor the CDC guidance as you attempt to become pregnant or are pregnant.

While there have been no reported cases of Zika virus transmission through assisted reproductive technology (ART), transmission through donated gametes (eggs and sperm) and embryos is theoretically possible. The FDA has issued guidelines for procedures using donated tissue, including protocols for sperm donation. Florida Fertility Institute follows the FDA’s guidance for tissue donation.

Based on the information available regarding the risk to patients and the unborn child, the physicians at Florida Fertility Institute strongly advise you and your partner NOT to travel to areas with active Zika transmission while attempting pregnancy. Failure to comply with this notice may result in a delay of your treatment as a patient at Florida Fertility Institute.

If you or your partner have recently lived in or traveled to an area reporting local Zika transmission, or have had sex without a condom with a man infected with Zika, and are interested in attempting pregnancy, Florida Fertility Institute will recommend that you wait to attempt pregnancy according to the time frames currently suggested by the CDC and the American Society for Reproductive Medicine as outlined in the following table. 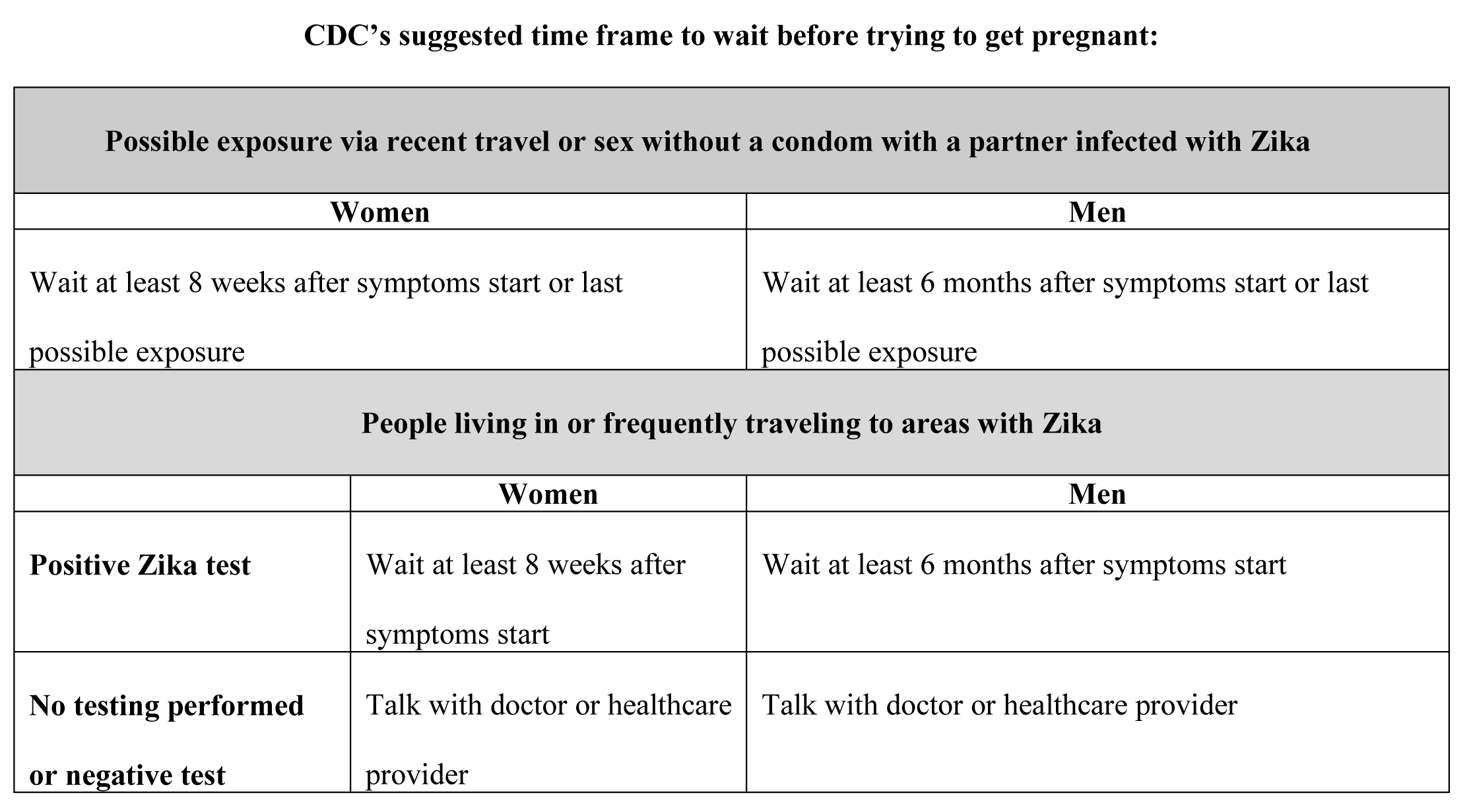